My fellow architects, you may not know it, but you have a rightful claim to the status of storyteller. Your professional roots of designing and constructing buildings are deeply connected to language, communication, and to storytelling in profound ways.

Let me ask you a question: The last building project you completed – how many floors did it have? Or asked another way, how many stories did it have? We deal in stories all the time; we design multi-story buildings or single-story homes. This isn’t merely a play on words. Deep historical and linguistic precedents connect architecture and storytelling.

Have you ever thought about why a building’s levels are also referred to as stories? I have found the etymological research fascinating, but inconclusive – so far.

Some have suggested medieval origins to our architectural use of the word story. This theory says that certain floors of castles were designated for storage of food and weapons during a siege, and such areas were referred to as “storeys.” Apparently this term grew into more general use.

One resource offers an alternate genesis with the assertion that “the front of buildings in the Middle Ages often were decorated with rows of painted windows.” Stained glass I’m familiar with, but memories of medieval painted glass elude me.

Other etymological links to the modern use of “story” might be the Gaelic word staidhir (stairs), or the Old French word estoree (building). It may go back to the Latin word historia (history). Older is better for us in the search for word origins.

One Latin text has this phrase: una historia octo fenestrarum, meaning “a story of eight windows.” We still use the term clerestory for a series of high windows. Maybe this reference provides a significant link.

The terms and ideas I’ve presented so far are a summary of my online findings. I have an idea which presses further back into history but isn’t easy to confirm via online searches. Decorative windows are a contender for our origin story, but I have an older architectural element to consider.

I can’t prove it, but I believe the origin of building stories reaches back to Greco-Roman times. Many Greek temples included decorated friezes depicting floral ornaments or other repeated patterns. However, some featured sculpted scenes of mythological or historical importance: ceremonial processions, sacrifices, battles, or other events.

A quick side note. Evidence shows that friezes were originally embroidered materials, themselves carried in processions, full of symbolic and cultural representation. These woven friezes served as the decorative precedent for the building component we are focusing on.

Anyway, these sculpted friezes served as pictorial narratives, high upon the temple structure. Their images told the story of the god, goddess, or ruler for whom the temple was built. The ancient Master Builder (the architektōn) made the history, the legend, the story a prominent feature of the temple. The first Architects solidified oral traditions and elevated the great stories.

As you might guess, the most famous and the most studied of these narrative friezes is that of the Parthenon. About a meter tall and 160 meters in length, the frieze originally wrapped the exterior of the cella, under cover of the portico. Centuries later, large portions of this historic marvel draw crowds in museums in London and Athens.

Experts explain the narrative of the Parthenon frieze begins at the southwest corner and depicts the gathering of a ceremonial procession. Different groups are shown through the long march and the linear story culminates with the presentation of a royal garment to Athena, the goddess of wisdom and warfare, the protectress of ancient Athens.

This narrative devise was employed in many Greek and Roman temples. It held a valued role in ancient culture.

I’m not certain if this specific building type, the Greco-Roman temple, and this ancient form of narrative, the frieze, serve as the basis of our current use of story. I don’t think this was covered in college (unless I dozed off during that lecture). Hours of online image searches haven’t yielded any further clues. I don’t think I’ll find a picture of a multi-tiered temple with a frieze at each level. That would make my case irrefutable!

Further investigation is needed. I’ve begun reaching out to experts, hoping to find the definitive link between temple friezes and our building stories. If you are that expert, or if you know this elusive link, please let me know.

Hard evidence aside, let’s initiate a bit of oral tradition here and now. We can be the storytellers. Let’s elevate this tale: The first architects solidified oral traditions and elevated the great stories, that’s why our buildings are measured in stories today.

In future articles we’ll look at other connections between architecture and storytelling. If you have any questions or anything to add please let me know. And feel free to comment below. 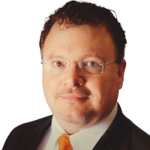 I’m a Registered Architect with over thirty years of wide-ranging experience. I spent three years running my own business, but I have returned to the world of the employed. I still miss the people-centered activities of marketing and business development.

I find and promote (and sometimes write) great stories of architecture and architects. The world loves what we do, even when they don’t fully understand it. They need our stories.

We are in a Golden Age of Storytelling, but architects are missing out on this zeitgeist. We’re not benefiting from the public’s need to be engaged with compelling stories. We’re not leveraging our “story-building” heritage. We’re missing out. My calling is to change this for us all.

I am fascinated by the art and science of storytelling. My mission is to help my fellow architects understand and tell their stories. I also believe there’s an untapped market for fictional stories of architects and architecture – crafted for page and screen – to engage the culture at large.

“Those who tell the stories rule society.” – Plato