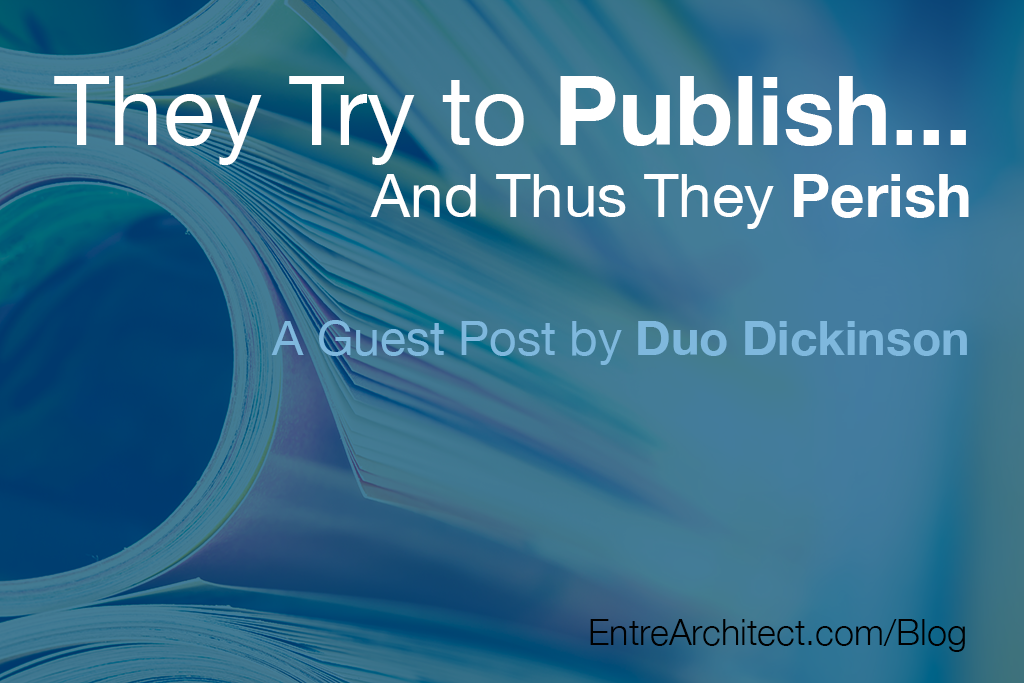 Starting out in architecture on your own, not as an intern, or a middle career employee, those of us who want personal expression in design see two venues: competitions that are open to anyone or publication of what you have done.

You know you have the chops. You are convinced that what you do has a message, worth, meaning: You just need the “Street Cred”. Screaming your genius in a closed room on your laptop feels like playing Solitaire – you win, but who knows. No one hears you. No one sees you. (and no one pays you – in fact you pay them).

It is a chicken-and-egg conundrum; how to you get work, if no one knows your work? And you cannot have someone see your work (let alone publish it or get an award) unless you design things that get submitted.

So you create to submit – either to a competition or a publication. And in them InterNetWebs there are an infinite number of sites, worldwide, open 24/365. Only they are seen by people like you. Trade publications are dying or dead. I was on the cover of HOME, Better Homes and Gardens, Fine Homebuilding: they either do not exist or print a tiny percentage of what they once did. They simply do not count on designers as their editorial focus.

There are many electronic competitions appealing to thousands of young designers trying to prove themselves in pixels. But even with success, a “winning” designer often doesn’t receive the attention they expect. Architects get the most attention for new work that actually gets built, from those who find them from somewhere else (usually a friend or client)… through referral. Only then does the validation of your worth by a third party pay off. “Getting published” is not like someone going to the PR store and choosing your product from the “shelf”.

That is not how it works.

I was 29 when other 20-something editors chose our house as a Record House in 1984. Then Progressive Architecture saw the virtue I proposed for their Young Architect Issue. I was soon published among those pages too; not for my architecture, but for my work as an author. My second book was coming out in 1986 and I would go on to write 6 more, all meshing with the demands of the media.

But the books were not about me.

They were about other architects: as was much of my writing. Then someone saw the books and wrote a piece about what I do in the New York Times. That exposure lead to 700 contacts over a decade, directly resulting in 40 new projects and many more projects born from those connections.

That can never happen again.

The 20th century New York Times was a cultural singularity, not seen before or since. An entire Boomer Generation held it as “Their Voice”. No more.

But none of the jobs I received from The Times were because I was anything but making stuff seen by others as good. The next house I submitted to Architectural Record was, and still is, to me, great architecture – but went unpublished by anyone, ever. And even though perhaps 200 of our designs have received attention through publication (most recently just a couple of weeks ago),  many more rejections than acceptances have been received over the last 35 years… many more.

So how do you get published?

First, you do good work. Second, you present it well.

If you write, do not do it for other designers. Write for those who need the services of any designer.

And most importantly: (caps intended) DO NOT DESIGN FOR THE IMAGE. Design for your clients, their budget, the site, the context, the culture: NOT FOR THE AWARD, NOT FOR THE ARTICLE, NOT FOR YOUR PEERS. If you are like me, that means you get published less.

Five years ago or so, I was asked by a branch of the American Institute of Architects to write a piece on PR and its role in architecture. I have a fair amount of exposure over the years, so I have a large footprint, for a tiny firm, on a variety of internet platforms. I knew I was being asked to offer clever advice and insights to game a system of recognition that benefits the relentlessly self-promoting.

My work is not of the avowed Modernist “Canon”, but additionally, what I do is not so appealing to the “Neo-Traditional” Canon either. I get some affirmation simply because the work appeals to people who want to build. It’s not for people who want credibility by publishing “correct” work.

So I wrote about that.

That piece for the AIA was up, in a corner of a corner of the Internet for a couple of years. Then it vanished, for whatever reason. I do not know. But under any Canon, I am only “correct” under one set of principles: that people find Beauty in what I do.

So that article was wiped from view by the voice of a Canon that I was made Fellow with last year (the AIA): not just for my aesthetics but for my impact on those who design and those who might want design services.

It is hard to resist the ego stroke of your image on another’s page… but that result often pollutes the profession. Homes are the gateway drug of architecture for many, if not most, people. Architects may… we may design only 2% of them.

Because many of us design to get published, promoted, to be included in a show, a lecture, a school, we make things that we think will appeal to the gateways of this exposure – not for those who actually pay for and use the work we design.

In that long-gone AIA article, I laid out three principles. They are nothing new… and they are frustrating. But they are true:

“1) We do work that is, objectively, interesting and competent – shallow trendiness or safety-in-pandering or design-for-the-camera is not in my genome.

2) We partner with clients and create a personal relationship that survives all the ups and downs that occur in life and building – our open-ended, client-based design process takes longer, but it creates a deep trust in the value of my work.

3) Despite all the media I employ, it is a guileless, transparent effort without an agenda. It’s an open book practice, where I talk frankly about our focus, process, failures, as well as strengths.”

Most of the architects getting ink, especially high profile exposure, do not follow the principles I describe above. They are a tiny group… but thousands upon thousands imitate them, stare at the cool glasses and black clothing and compelling images and effort imitation.

They try to publish… And thus perish as professionals.

I was trained in school and during my internship, that whatever gifts I had or effort I put in, was for those who use the results. It was for our culture. If I did not push the possibilities, why hire me? But do not hire me because I have been published. 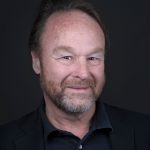 Graduating from Cornell University in 1977, Duo Dickinson opened his own architectural practice in 1987. He currently sits on 5 not-for-profit boards and about 20-30% of the work at his office is dedicated to pro bono or “at-cost” work for not-for-profits, totaling over 150 projects for over 30 organizations over the last 30 years.

His work has received more than 30 regional and national design awards and he recently elevated to Fellow at the American Institute of Architects.

His design work has been published in more than 70 publications including The New York Times, Architectural Record, and House Beautiful. He is the architecture critic for the New Haven Register and is a feature writer for the Hartford Courant media group.

His blog, Saved By Design has received over 75,000 views and he has written 8 books. His latest book, A Home Called New England with Steve Culpepper was published this past November.

Duo hosts the radio series Home Page on WPKN Radio in CT. He is the co-founder of The Congress of Residential Architecture (CORA) and has taught at Yale College and Roger Williams University in Bristol, Rhode Island. He is currently on the faculty of Building Beauty: Ecologic Design & Construction Process, at Sant’Anna Institute in Sorrento, Italy as well as co-chair of their American Advisory Board.